Such effects can be seen as a lack of understanding of Indigenous culture and kinship networks. Feelings of helplessness, shame and alienation from services may also contribute to the undervaluing of birth registration and certificates in Indigenous communities. The right to birth registration has been recognised in two human rights treaties.

However, it is less clear whether such a right includes a right to a birth certificate. The CRC also recognises that Indigenous children are at greater risk of non-registration. The most recent articulation of the right occurred when the United Nations Human Rights Council adopted a resolution on birth registration in It represents the first in its history dedicated to the issue of birth registration and legal identity.

It urges states to identify and remove physical, administrative and other barriers that impede access to birth registration. The author believes that the resolution provided an opportunity to state that the right encompasses a right to a readily accessible birth certificate.

They argue that inadequate attention is being paid by Australia to the right of birth registration and a birth certificate in its periodic reports. The Committee stated that they were concerned about the difficulties specifically faced by Aboriginal persons in relation to birth registration. They also noted with concern the obstacles to both registering a birth and obtaining a birth certificate.

These represent a significant step in addressing this issue, as recognition and recommendations made by the CRC clearly demonstrate that current practices are in need of reform and do not comply with international human rights law. The conclusions of Castan, Gerber and Gargett are valuable to build on the importance of international human rights law in establishing a right to birth registration and a birth certificate and deficiencies in Victorian legislation.

Some reliance must be placed on the literature in drawing conclusions on the practical effect of the legislative regime.

Indeed, it is only when it comes to enrolling in school or obtaining a tax file number, for example, that the difficulties of not having a birth certificate come to light. These issues are also likely to be experienced in NSW. One of the general functions of the Registrar as stated in the BDM Act is to ensure the registration system operates efficiently, effectively and economically. The BDM Act identifies the registration of births and the issue of certified information from the Register as two primary objects.

Every birth in NSW must be accompanied by a notification. If the birth occurred in a location other than a hospital without a registered doctor or midwife in attendance and the child was not taken to hospital within 24 hours of the birth, two independent witnesses not the parents must have seen the birth occur and be prepared to sign statutory declarations that contain specific statements relating to the birth.

Such protracted administrative processes are not supportive of measures that work to improve the health inequality experienced by Indigenous mothers and babies. It is widely acknowledged that Indigenous mothers experience poorer maternal health outcomes. Registry policies around unsupervised homebirths further discourage parents from engaging with government administration after the birth of their child.

This includes a birth certificate, passport, Centrelink statement or Certificate of Aboriginality.

Birth certificates in NSW during the 's - What Do You Think? - Essential Baby

It seems that if parents experience difficulties in registering the birth of their child within the time limit, then the procedure for late registrations further exacerbates the hurdles for registration. The documents required to prove the identity of the child are unlikely to exist in the first place because most require the production of a birth certificate. This creates a catch situation and there is no room for discretion on the part of the Registry if such documents are not available. The process for late registrations will create further difficulties for parents who choose to register their child upon school enrolment.

This is a particular issue for Indigenous children, who already face significant barriers in accessing education. The Registrar may issue a birth certificate to an individual [75] and detailed requirements are found on the BDM Website and the Application for a Birth Certificate form. An authorised individual listed on the application must also certify the forms of identification. It is much the same situation as discussed above, where many forms of identification required by the Registrar are those that can only be obtained with a birth certificate.

The BDM Regulation sets out the information to be given to the Registrar when registering a birth as well as the fees charged by the Registry. The BDM Website briefly mentions the existence of an Indigenous Access Program that holds information days to increase birth registration and assist Indigenous people to apply for certificates.


However, there is no other publically available information regarding the dates and location of information days. Victoria ran a similar initiative in in regional areas. The Australian Capital Territory, Victorian and NSW Registries have also developed educational materials such as posters and flyers specifically for the Indigenous community.

The NSW Registry does have a Memorandum of Understanding with Link-Up [85] to assist members of the Stolen Generations, allowing the use of alternate forms of identification and the ability to waive fees. There are initiatives by other registries in Australia that are promising. Other forms of secondary identification in the Northern Territory, such as identification letters from Aboriginal communities and Larrakia Nation identification cards, can be accepted at the discretion of Registry staff.

Part Two of this article demonstrated that international human rights law supports universal birth registration and the automatic provision of a birth certificate upon registration. An analysis of the NSW legislative framework does not support this position nor does the framework emphasise the importance of registration as the process of becoming legally visible within the community. In the following Part, anecdotal evidence of unregistered births in parts of NSW will serve to further highlight the procedural barriers in the current legal framework.

It is the work of community organisations that act as the only point of intervention, expending significant amounts of time and money to remedy this issue. The most comprehensive discussion surrounding birth certificates in the Indigenous community is related to identification for driver licensing and sporting programs.

There are serious flow-on effects that non-registration or lack of a birth certificate can have on an individual, limiting their capacity to participate in economic, cultural and social activities. In all cases, it is clear that there is far greater need for culturally appropriate registration and certification processes for the Indigenous community to overcome this inequity. The projects discussed below identify an acceptable system of administering and issuing birth certificates to Indigenous people to overcome inequity in access to mainstream social activities.

It is clear that the current model of service delivery for the Registry is inappropriate for the Indigenous residents of Dubbo, Brewarrina, Walgett and Bourke. At the end of the 12 month Pilot, birth registrations were administered and families were assisted by the project. Three more registration days were held in November where almost registrations occurred. A number of cultural and economic factors were identified by NSWSR as challenges to gaining identification. These included collective family child raising, individuals being known by different names dependent on location and situation, being intimidated by the courthouse, transient lifestyles impacting on safekeeping of paperwork, distance and lack of transport to Registry locations and poor literacy and numeracy amongst certain communities.

Innovation was required to work around the barriers in the birth registration and certification regime, revealing deficiencies in the legal framework. The culturally appropriate nature of communicating with families in this way touches on the importance of understanding culture and regulation.

Flexibility was key to the success of the projects, with the Registry accepting alternative documentation to establish identity. Finally, the provision of funds covering the cost of the registration and issuing of certificates overcame the most significant obstacle experienced by individuals. This was coupled with a greater understanding of culture and kinship networks as well as a high level of trust. The provision of a birth certificate officially recognises an individual as a citizen and resident of NSW.

It assists one to participate in the community and access the rights and privileges that such identification grants. On another level, the projects impacted on the provision of services by agencies through recognition of the resident population numbers. For the State it was anticipated that, if the Dubbo Pilot was extended, population numbers could increase by up to 25 per cent, thereby affecting the levels of GST received.

The barriers created by the regulatory regime of birth registration and certification are also identified in driver education programs. These programs often provided assistance to participants to help them obtain a birth certificate. It is the lack of birth certificates that proves to be a major issue in Indigenous communities in NSW, particularly in rural and regional areas.

This is most evident in the high rates of unlicensed drivers, particularly young people. Driver licence sanctions disproportionately affect Indigenous people in these areas. The recommendations of the Committee represent perhaps the only high-level statement from a government body of the issues surrounding birth registration in Indigenous communities. The barriers caused by the birth registration and certification regime in NSW are only exposed through the work of other agencies and these are addressed indirectly through innovative service delivery. Reform to the regulatory regime would address these issues, particularly if they were in line with regulatory best practice and human rights standards.

In order to illustrate this, the following Part will discuss and explain regulatory theory. Examining the issue from this perspective will highlight the importance of trust in bringing about the desired regulatory outcome of the Registry. Understanding the regulatory framework surrounding birth registration in NSW is instrumental to understanding how behaviour and attitudes to birth registration are shaped.

In its current form, the regulatory process is long and complex and can serve to alienate Indigenous Australians. 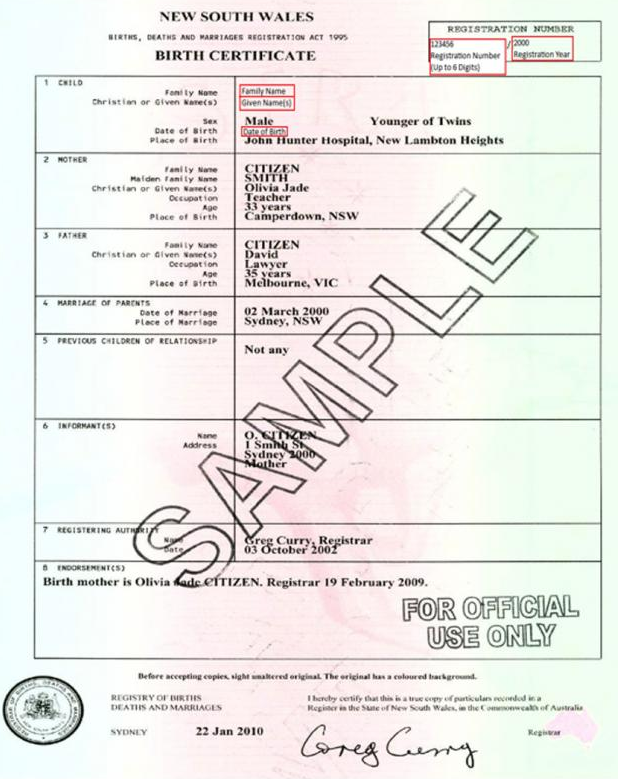 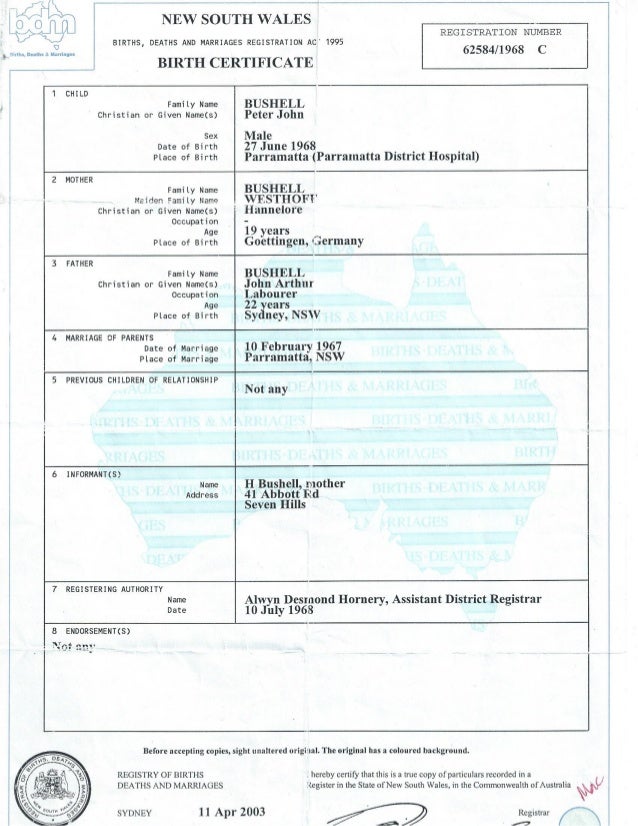